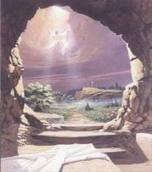 If Christianity is to be shown false it will occur when someone can show by the preponderance of the evidence that the empty tomb can be explained without a bodily resurrection.  Scholars are almost in universal agreement that Jesus was a historical figure, who died on a Roman cross, was buried in a known tomb, was reported missing from the tomb days later, and was reported to be seen by many.

What are the theories explaining this known information, and which theory has the best explanatory power?  I will consider some of the popular arguments and close with the theory that Jesus actually rose from the dead in bodily form.

1.  The Swoon Theory - The Swoon Theory has Jesus not dying on the cross, but resuscitating in the tomb.
2.  The Conspiracy Theory - The story of Jesus resurrection was a concoction of his disciples.
3.   The Hallucination Theory - The disciples merely hallucinated a resurrected Jesus.
4.  Grief Related Hallucination Theory - Hallucinations where individuals are so grieved they project
the person that is being grieved for.  Some say Paul was so grieved at persecuting Jesus that he
hallucinated in seeing Jesus.
5.  The Myth Theory - Similar to the Conspiracy Theory, the Myth Theory has subsequent  writers inventing a resurrected Jesus.
6.  The Stolen Body Theory - The body of Jesus was stolen by his disciples.
7.  The Twin Theory - Jesus had a twin or someone who looked just like him who died on the cross.
8.  The Alien Jesus Theory - This theory has Jesus as an alien who possessed advanced technology to make it appear that the resurrection took place.
9.  The Bodily Resurrection of Jesus Theory - Jesus bodily rose from the dead.

Email ThisBlogThis!Share to TwitterShare to FacebookShare to Pinterest
Labels: Resurrection