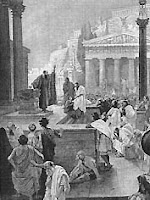 The apostle Paul correctly defined the importance of the resurrection by saying,  "If there is no resurrection of the dead, then not even Christ has been raised.  And if Christ has not been raised, our preaching is useless and so is your faith.  More than that, we are then found to be false witnesses about God, for we have testified about God that he raised Christ from the dead. But he did not raise him if in fact the dead are not raised.  For if the dead are not raised, then Christ has not been raised either.  And if Christ has not been raised, your faith is futile; you are still in your sins (1 Cor. 15:13-17)."  If Jesus did not rise from the dead, then all who have claimed him to have risen are the most deceived people in the history of the world.
Paul goes on to say a few verses later that, "But Christ has indeed been raised from the dead (1 Cor. 15:20)."  The evidence for the resurrection is not blind, but in fact, overwhelmingly supports that Jesus bodily rose from the dead.  It is this evidence that has compelled millions throughout history to take up the cause of Christ.
Paul understood the importance of apologetics.  Apologetics comes from the Greek, meaning to give a defense of.  In the case of Christianity, apologeitcs is to give a reasoned defense for the Christian worldview.  Not only can the Christian worldview be defended, but the Christian worldview should be spread throughout the entire world.  Easter and apologetics go hand in hand for the Christian man or woman.  If all Christians are ambassadors (2 Cor. 5:20) of Christ then it is incumbent upon all Christians to be apologetically trained.  In fact, this is exactly the charge of the apostle Peter (1 Peter 3:15).  Defending and evangelizing must co-exist.  However, this symbiotic relation is often missing in today's Church.
Too many of God's people have dropped the ball when it comes to apologetics.  So many issues are present today, especially in the West, that need to be addressed by God's people.  When God's people are unable to bear witness to his truth, disastrous results will take place.  David Koresh and Jim Jones are just two examples of deception that has taken place under the guise of Christianity.    Paul warned the church of false teachers at Colasse and John, likewise, warned of false teachers in his three epistles.  Gnosticism presented an early challenge to the Christian worldview and it was met squarely with Christian apologetics.   Today, the  Jehovah's Witness and Mormonism present deceptive philosophies that have borrowed from the truthfulness of Christianity.  It is crucial for the entire Church, not just pastors and leaders, to be trained in how to defend God's message of truth.
If more individuals within the Church took apologetics seriously, it would benefit and strengthen the Body.  Apologetics allows the Christian to not only strengthen his/her relation with Christ, but provides a springboard to engage the culture that is constantly asking questions.  Apologetics gives confidence to God's people and opens doors to better share the hope Christians have in Jesus.

Paul understood full well the relationship of apologetics and the gospel message of Jesus.  Easter is not a celebration that should be observed on a yearly basis and then forgotten, but it should compel Christians to share the good news of Jesus resurrection whenever the opportunity presents itself.  Being apologetically trained allows the believer to share the good news with those where they are at.  Being relevant on current apologetic topics allows for more discussion between the Christian and non-Christian.  Paul perfectly illustrates this point in how he dealt with the Jewish people (Acts 17:2-4, 10-12) verses the secular Greek culture (Acts 17:16-34).  In both cases, Paul tailor's his message to address the group he is dealing with.  With the Jews he shares from scripture, but with the Greeks he quotes from known poets to make a point concerning Jesus and the resurrection.
The Easter story and apologetics have always existed side by side.  Apologetics supports the Christian worldview by defending it, and providing a foundation to evangelize a world that desperately needs to hear the good news of the Messiah.
Posted by Shelby Cade at 12:34 PM

Thanks for the comment. I believe the most current apologetic issue will vary depending on where you are at. It could be relativism, Darwinian evolution, the bodily resurrection, truth, Islam, ect. It is hard to cover all these topics in a comprehansive way,but I still believe it is incumbent on the Christian community to have knowledge of where the other side is comming from. Maybe one lives in an Islamic community; they should study up on Islam. Maybe it's a Mormon community, study Mormonism. What if an office worker always punts to relativism? One should be prepared to deal with anything that sets itself up against the knowledge of Christ (2 Cor. 10:5).

It's difficult to answer all questions, but I believe the Christian needs to study and always be ready to defend truth. Many apologists are trained in a particular area (i.e. Habermas in resurrection apologetics). I feel, however, that many in the Church never do any study, and expect the pastor to do all the work for them. That is not what I read in my Bible in how to deal with those asking honest questions of the Christian worldview. On the flip side, many who call Christianity into question are not asking honest questions.

Everyone check out OC Apologist; it is a great site. Thanks, Andy. Blessings!