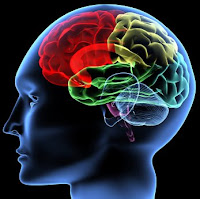 There are many arguments for the existence of God, but perhaps the strongest argument for God's existence is the argument from mind or consciousness.  Listening to a debate between J.P. Moreland and Clancy Martin, Martin who was arguing against the existence of God made the point that the mind is puzzling to explain on a purely naturalist level.
Looking at the mind, there are two opposing worldviews as to how the mind developed.  One view explains the emergence of mind without the need for God.  Many who take this view see the mind as a by product of Darwinian evolution.  In other words, everything can be explained by materialist means.  A big problem arises when trying to explain the mind on a purely naturalist level.  Think about your first person awareness, how is this to be explained by way of science?  So, the mind causes problems for naturalism, if this is how we are to view the world.

Some say the rescuer of the materialistic development of the mind is physicalism. Physicalism is defined as, "everything that exists is nothing but a single spatio-temporal system which can be completely described in terms of some ideal form of physics." [1]  A simpler way to express this idea is that the physical is all that exists, there is no such thing as God or the soul; no non-physical entities exist.  Is physicalism true?  Can physicalism/naturalism explain the existence of the mind?

In his book, Scaling the Secular City, philosopher J.P. Moreland points out the problems with physicalism.  First, physicalism is self-refuting.  If physicalism is true then so is determinism.  In other words, we are just programed machines of Darwinian evolution.  Philosopher Michael Ruse has said, " Free will as traditionally conceived...simply does not exist.  There is no way the evolutionary process as currently conceived can produce a being that is truly free to make choices." [2]  If all is determined on a naturalistic/physicalist view then we have no free will, but this does not seem to be the case with our mind.  If physicalism is true, then so is determinism.  J.R. Lucas says, "Determinism, therefore, cannot be true, because if it was, we should not take the determinists' arguments as being really arguments, but as being only conditioned reflexes." [3]

A second problem exists in that humans are rational beings.  Where does this sense of rationality come from?  J.P. Moreland makes several points to show that we are rational, and therefore, physicalism is the incorrect view.  First, we have intentionality or thoughts about the world.  Second, reason, propositions, morality, laws of logic and truth seem to stand against physicalism. Third, we have an agent view of the world.  An agent view means we can, deliberate, have free will, and be an agent to act on our free will.

A third problem with physicalim/naturalism is that scientific knowledge cannot explain the mind.  How will science ever be able to test a person's first person awareness?  How is love, hate, laws of logic, morality and the like measured by way of the scientific method? The mind is a tremendous problem for the physicalist/naturalist as stated by physicalist D.M. Armstrong, "It is quiet a different matter to hold that the nervous system should have the power to create something else, of a quiet different nature from itself, and create it out of no materials." [4]

The mysterious mind is a difficult explanation on a naturalistic or physicalistic view.  Perhaps the best explanation for mind is that there exists a Master Mind from which the mind originated.  There does seem to exist in all humans both mind and body.  We seem to be more than just blobs of matter that accidently arose. This is exactly the view of Scripture when it says, "So God created mankind in his own image, in the image of God he created them (Genesis 1:27)."  John Calvin the famous reformer once said, "the endowments which we possess cannot possibly be from ourselves.  They point to the Ultimate Mind and ground of rationality himself." [5]
[1]  Moreland, J.P., Scaling the Secular City, p. 80
[2]  Michael Ruse as quoted in J.P. Moreland's, Kingdom Triangle, p. 49
[3]  Lucas, J.R., Freedom of the Will, p. 114-15
[4]  Armstrong, D.M., A Materialist Theory of the Mind, p. 30
[5]  John Calvin as quoted in J.P. Moreland's, Scaling the Secular City, p. 103
Posted by Shelby Cade at 10:10 AM

Excellent post! The notion that all notions are simply manifestations of the physical domain is unreasonable. DesCarte... "I think, therefore I am", is appropriate here. Thanx for your posts. I'll be coming back.

Hey there,
I came across your blog after my sister saw it listed as a link on poachedegg... Looks like you and I had the same idea about exploiting Edwin Abbott's idea of Flatland for the sake of Christian "fourth dimensional" thinking. I've also been fascinated with questions of natural science and philosophy of mind, so it's neat to come across another blogger out there asking the same questions.
FYI I'm a Catholic deacon preparing for ordination to the priesthood in May for the Archdiocese of Kansas City, KS... born and raised. My dad and I went pheasant hunting out in your neck of the woods (prairie?) this year, and I do enjoy being out there on the skin of the world...
Best wishes,
Nick
http://upyetnotnorth.blogspot.com/

I've only been in Kansas a little over three years. I too love Abbott's "Flatland." There are so many great insights in that book.

The priest who left here last year was a great guy (Father Don McCarthy). I enjoyed visiting with him and miss him. Blessings to you on your ordination. I might be out in KC this March for a debate between a Muslim and Christian scholar. Thanks for the comment, I'll check your site out. Blessings, Shelby